Is your Doctor playing Dice with you ? The  Risks are yours !

It is bounden duty of a Doctor to tell his patient pros and cons – including Risks – of treatment suggested by him. Plain common sense, backed by law and several cases.

However, sometimes the Doctor/ Surgeon errs grossly on this. Reasons ? Money or sheer incompetence / overconfidence. Who pays ? The Patient. For a lifetime, many times…

While there is a whole plethora of cases similar, they still do not seem to stop. In one of the recent ones, Orissa High Court has again observed :

” It is the duty of a doctor to explain his patient or relatives chances of success and the risk of failure of the suggested treatment and inform them about the foreseeable risks and possible negative effects of the treatment, keeping in mind the patient’s specific condition….”
Another interesting observation :
” A common man treats the doctor as ‘Dhanvantari’.He has tremendous amount of confidence on the doctor. The comforting and reassuring words of the doctor are very powerful and sometimes it creates miracle for the patients and strengthen them to fight from within. That is why the doctors should shoulder their responsibility with all care and caution, rise to the occasion, believe in hard work and discipline and behave with all sensibility not thinking only of their Everestian interest of amassing huge wealth burying larger collective interest of common men which would strengthen the patient-doctor relationship.”

The Court went on to explain that it it was the duty of the petitioner to explain the deceased or at least the complainant, chances of success and the risk of failure of the suggested treatment and inform them about the foreseeable risks and possible negative effects of the treatment keeping in mind the patient’s specific condition.

The Court referring to Alister Anthony Pareira v. State of Maharashtra,  (2012) 2 SCC 648 held that there were no prima facie materials for commission of an offence under Section 304 Part II IPC. However, the materials were sufficient under S. 304-A IPC. The petition was disposed of with the direction to trial court that it was free to assess the evidence which would come on record during trial.

The original order is here : 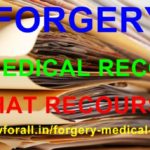 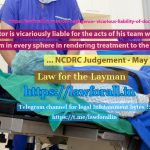