Medical Negligence – is a unique genre of crime. Done (obviously) without intent but negligence, it is usually committed behind closed doors of an Operation Theater on the uninformed and the unconscious with perhaps NO knowledge of Law. The negligent party- doctor or the Hospital has usually the infrastructure and resources to fight a long battle. They can employ a battery of lawyers well versed in various tactics, including how to delay the case as much as possible since the delay only serves to benefit the guilty and further harass/ cause mental anguish to the wronged. And may also bring in a battery of “brother” doctors, research articles to support their stand. The case may be ( and usually is ) contested before a Bench that itself may have a very limited knowledge, if at all, of the medical complexities.

Forgery is the bane of any judicial system. Plenty of provisions exist in law to penalize the same. Yet it happens. And when it happens in case of medical records it is more difficult to find out and prove since, to begin with, all such records are fully in the control of those who can easily manipulate them to suit their ends. Not only forging but also withholding them inspite of clear rules to the contrary.

But sometimes, perhaps, God intervenes.. as seem to have happened in the case herein. Others sufferers can only blame their past sins, perhaps ? This is a situation when the complainant is herself a doctor – imagine then the status of non-doctors !

These excerpts hereunder are paraphrased from :

Emphasis is mine. Read on, wonder / cry, and hope you are never in these hapless situations !

For those interested in seeing the Court Judgement in full, here are the relevant details to click on :

IN THE STATE COMMISSION: DELHI

(Constituted under Section 9 of the Consumer Protection Act, 1986)

And from the Judgement :
” As discussed above, OP No 2 hospital is hand in glove with OP No. 1. OP No. 2 hospital has concealed the surgery notes from the complainant as well from this court. OP No. 2 hospital again has been ‘deficient in its services’. OP No. 2 hospital is thus directed to deposit an amount of Rs. 20 lakhs (twenty lakhs) in Consumer Welfare Fund of the State maintained by this Commission. A copy of these orders be sent to the Medical Council of India, Medical Council of Delhi,Directorate of Health Services Govt. of Delhi and Guru Nanak Eye Center Govt. of Delhi for taking actions against the OP No. 1 and OP No. 2 hospital. These authorities may also like to advise the enquiry committee who without participation of the complainant in the enquiry proceedings and in the absence of material records submitted its report. ‘

However, the matter does not end here.

Both the Opposite Parties filed appeals with the Hon’ble NCDRC. Relevant portion of an order of NCDRC states :
“4.        It is informed that in pursuance to the order dated 27.07.2018, the Appellant in First Appeal No. 1384/2017 and the Appellant in First Appeal No. 1298/2017 have deposited the respective stipulated amount with the State Commission.  It is directed that the stay on the operation of the impugned order shall continue till the final disposal of this case.”

And bear in mind, even after conclusion of proceedings here. an appeal may still lie with the Hon’ble Supreme Court !

This is just one example. Imagine the scenario if patient suffered – for instance – paralysis due negligence. Chances that he/she will survive to get any relief ultimately are remote indeed ! 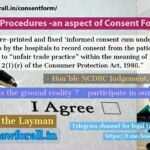 « Is a Mosquito Bite an Accident ?
The Coronavirus Crisis- some legal aspects »